Inquire about a speaking engagement

Thanks for the message! We'll get back to you as soon as we can.

During COVID-19, many of us are looking for creative ways to engage our communities, students, and staff. We believe that documentary can help your event stand out. We’re offering dynamic virtual presentations that incorporate clips from our films to unite audiences in a shared experience. And if you’d prefer to wait for an in-person event, please let us know. Stay safe and we look forward to hearing from you. 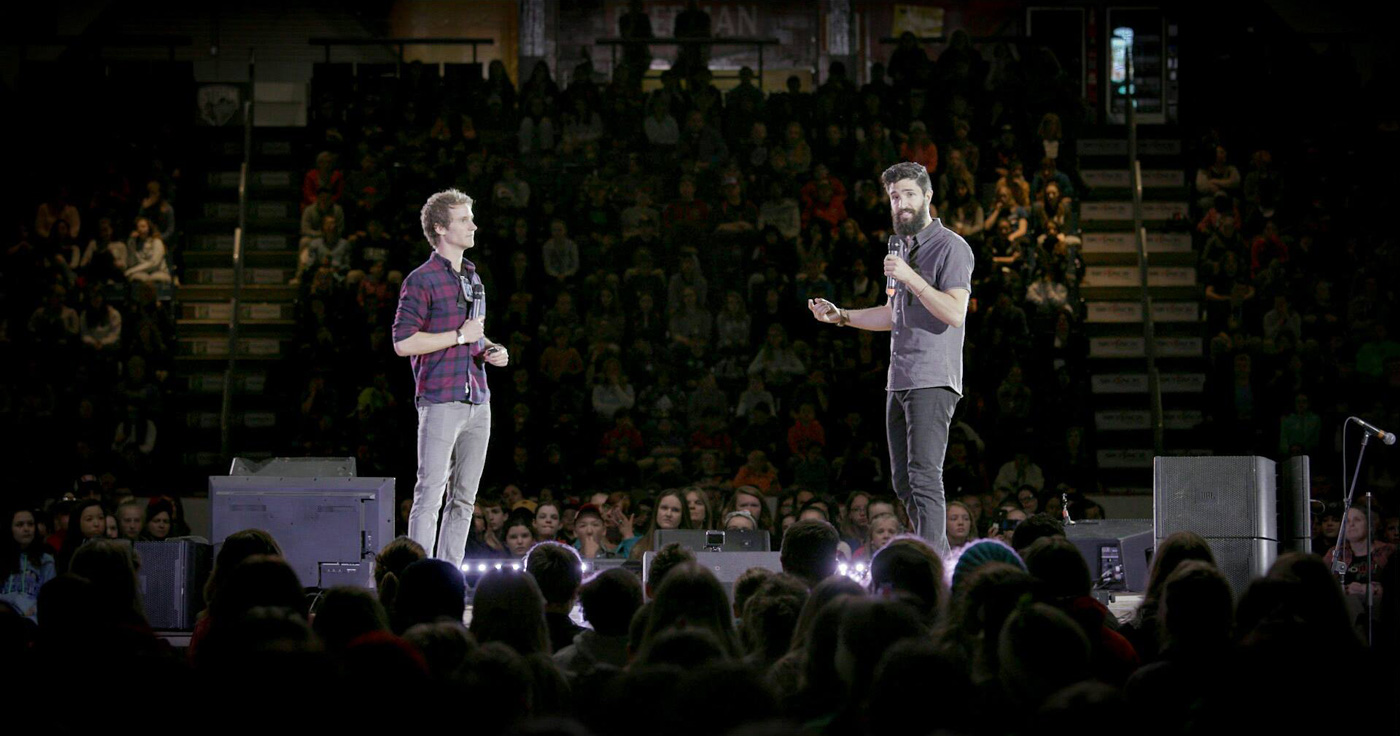 First they survived for two months on $1 a day in Guatemala. Soon after, they lived in a tent in a Syrian refugee camp. And most recently, spent 10 years documenting the journey of an undocumented boy in New York City. Chris Temple and Zach Ingrasci are award-winning filmmakers and activists, who on-stage, demystify some of the world’s most complex situations — leaving audiences more connected and empowered to make a difference.

As co-founders of the non-profit Optimist, Chris and Zach have created over 15 films and series that have raised $91.5 million dollars for the films’ causes — changing over 329,000 lives. Their films have been released globally by Netflix, Amazon, HBO National Geographic, and The Atlantic. 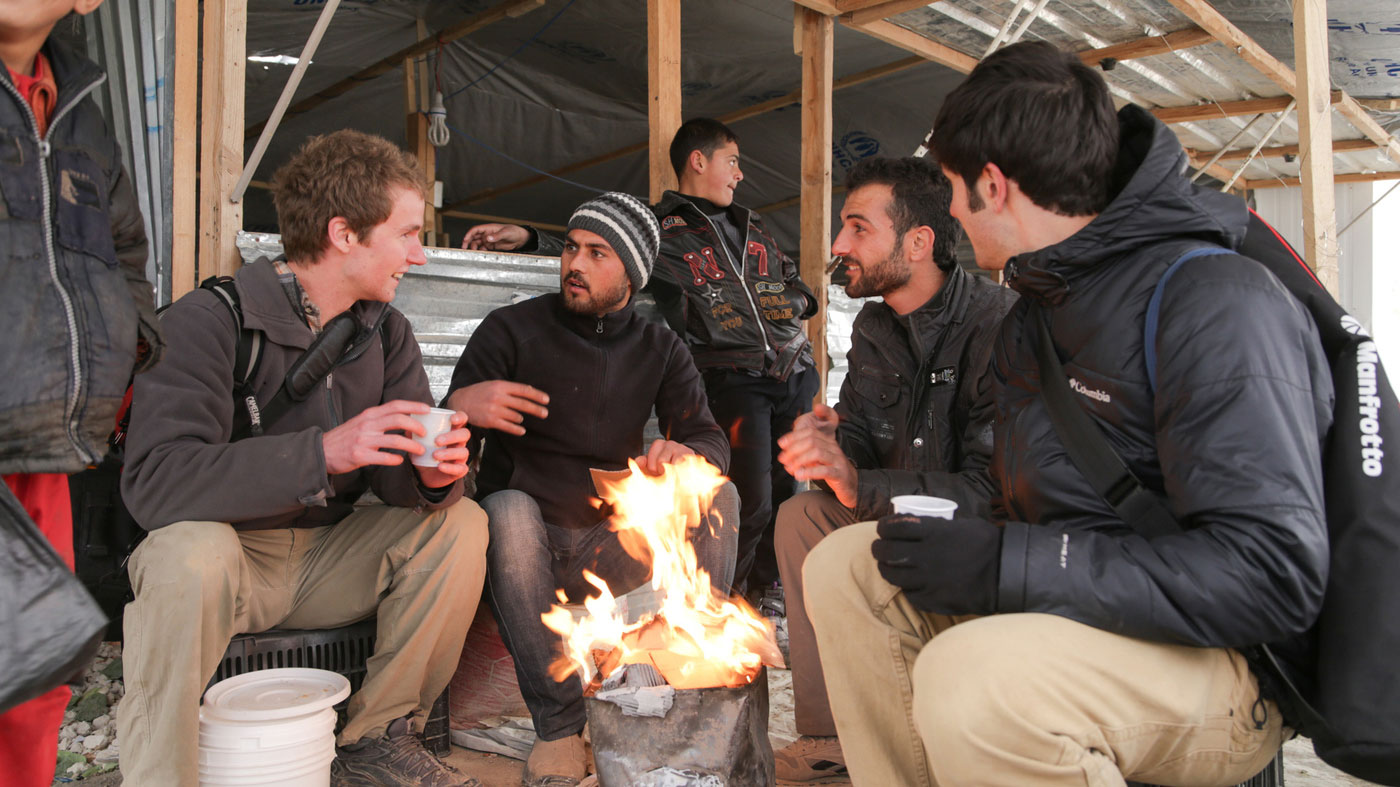 Chris and Zach have received widespread acclaim as bold storytellers and compassionate leaders of social justice — honored with the 2016 Muslim Public Affairs Council Annual Media Award, and recognized alongside Bill Gates and Angelina Jolie as two of the top 100 visionary leaders of 2015 by YPO’s Real Leaders Magazine. They have been called upon to share their expertise at TEDx, the United Nations, and the World Humanitarian Summit, and have been featured on CBS This Morning, as well as in major publications including The New York Times, Wall Street Journal, and Variety.

They are best known for directing the feature documentaries Living On One Dollar, Salam Neighbor, and their newest release, Five Years North, but their gift for storytelling also extends to the business world. As entrepreneurs, they’ve spoken at World 50 and WPO, and have collaborated with global brands, including Google, to tell their brand stories and expand their philanthropic impact.

Chris and Zach’s own journey began almost accidentally, and at a conference. As speakers, they are equal parts inspiring and relatable, while the stories they share are guaranteed to generate empathy and to humanize the world’s most complex and divisive issues.

What People are saying

Chris and Zach are pushing the boundaries of how we tell stories and maximize social impact in the 21st century. At just 30, they bring passion matched with professionalism and a humble respect for the people they’re seeking to help. They make an excellent addition to any panel or keynote.

Carolyn Miles, CEO of Save the Children

[Chris and Zach] don’t just make documentaries. They make themselves part of the story.

What I love about this film is the resilience it reveals…what you’ll see, as Chris and Zach saw when they moved into Za’atari camp, is that beyond headlines, behind the labels, are people that every one of you can relate to.

Her Majesty Queen Rania of Jordan

With several award-winning films and a 5-star presentation, Chris and Zach brought a complete package to our school. They’re relatable and inspiring, and most importantly, their efforts translated into action for my students.

On a subject too often discussed in numbers, Chris and Zach capture the human element of one of the greatest refugee crises of this generation.

Over 1.1 billion people in the world survive on less than $1 a day. This talk will take you beyond this statistic and demonstrate how innovative families are to survive life on the edge. Join accidental filmmakers Chris and Zach, whose research project living on $1 a day for two months in rural Guatemala led the duo to find an unexpected passion. What began as a moment of curiosity has grown into two award-winning documentaries distributed by Netflix, over $1.5 million raised directly for poverty alleviation, and a clear understanding that the poor are our best partners in ending extreme poverty. Through engaging use of video, personal stories, and research, Chris and Zach will help you build empathy for others around the world, achieve a sense of gratitude for the opportunities at your fingertips, practice curiosity to discover your passion, and equip yourself with the tools you need to create change. This talk will also include videos from their unreleased feature documentary, Five Years North.

This dynamic presentation will equip you with the tools you need to create change, whether in your business, non-profit, church, or day-to-day life. Appropriate for any audience looking to capitalize on their good intentions and turn ideas into action, this presentation will ask the hard questions and leave you with the inspiration and the practical tools to make the most of your charitable efforts. While many seek to make an impact on the world, we must first learn how. As Harvard Dean James Ryan says, the most important step before you set out, is to always ask, “how can I help?” By integrating videos from their films, personal storytelling, and key development strategies, Chris and Zach will provide a road map to help you get started, build your impact, and measure your change.

Just announced, Chris & Zach are offering a talk that will provide an inside look into their new, unreleased feature documentary. This presentation integrates clips from the film to provide a never before seen look at U.S. immigration. With footage spanning 10 years, this talk will bring you into the world of an undocumented child and the ICE (immigration) agent that patrols his neighborhood. It’s personal, timely, and surprising at every turn. The talk explores fundamental questions about migration in the 21st century: How do we justify our actions when we know they are hurting others? What is the human cost of the American Dream? If we listen to one another, can we heal our divisions?